“Blue ocean strategy” is the simultaneous pursuit of differentiation and low cost to open a new market space and create new demand. It is about creating and capturing uncontested market space, thereby making the competition irrelevant. It is based on the view that market boundaries and industry structure are not a given and can be reconstructed by the actions and beliefs of industry players.

Red oceans are all the industries in existence today the known market space. In red oceans, industry boundaries are defined and accepted, and the competitive rules of the game are known. Companies try to outperform their rivals to grab a greater share of existing demand. As the market space gets crowded, profits and growth are reduced.

A new business strategy developed by W. Chan Kim and Renee Mauborgne. In the competition market, it advises to compete and set new markets by putting aside competitors and taking advantage of the gaps of the current market. In doing so, the red ocean reveals the blue ocean dichotomy. Instead of competing in a red ocean and swimming in shallow waters in a common market with competitors, he plans to create new markets and reach a blue ocean. To compete only to pull down the prices and then sinking companies in the red ocean, while the alternative consumer-customer can find new markets, those who are growing stronger and growing. 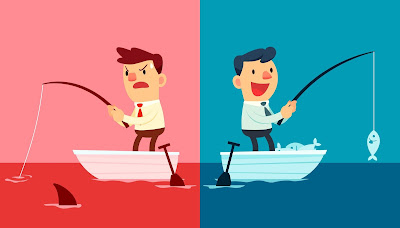 Looks like an exciting new strategy for today's post-modern businesses. But this new mode of operation, which has mobilized businesses, may seem to be the softest way to describe the examples of multinational corporations and colonialism that have already existed for two hundred years. However, the examples used in describing the strategy are not cross-border, but rather examples of local success. In this sense, we can say not only for multinational companies, but also for national companies.

Products become commodities, leading to cutthroat or ‘bloody’ competition. Hence the term red oceans. Blue oceans, in contrast, denote all the industries not in existence today – the unknown market space, untainted by competition. In blue oceans, demand is created rather than fought over. There is ample opportunity for growth that is both profitable and rapid. In blue oceans, competition is irrelevant because the rules of the game are waiting to be set. A blue ocean is an analogy to describe the wider, deeper potential to be found in unexplored market space. A blue ocean is vast, deep, and powerful in terms of profitable growth.
Add Comment
and , Blue , Marketing , Ocean , Pazarlama , Red , Strategy , Yönetim
26 Mart 2020 Perşembe